Cruelty-Free: What Does It Mean?

With the rise in sustainable shopping practices and eco-friendly consciousness, many have begun reflecting on how animals and animal byproducts are incorporated into the products they buy, which is where cruelty-free comes in. Let’s explore what cruelty-free means, the difference between cruelty-free and vegan, what animal testing involves, and what cruelty-free certifications to look for.

While there is no legal definition for “cruelty-free,” the commonly accepted description is a product that was created from top-to-bottom without harming an animal. Since the term “cruelty-free” is unregulated, though, any brand is allowed to label itself as cruelty-free without any legal repercussions.1

Some brands even sport the cruelty-free label without making any real effort to ensure that their suppliers or third parties don’t test on animals on their behalf. While cruelty-free is a good baseline, it’s not the whole picture as a company can be cruelty-free and still use animal products in their formulas.

While the definitions of cruelty-free and vegan are not altogether aligned, the principle behind each is relatively the same; both represent and champion the protection of animals and their rights.

However, with this fundamental principle in mind, the definitions seem to yield an ethical gap:

For example, a moisturizer may claim to be cruelty-free but contains beeswax and is therefore not vegan. On the flip side, a vegan shampoo or vegan eye cream that’s free of animal ingredients or by-products may have been tested on animals and is thus not cruelty-free. 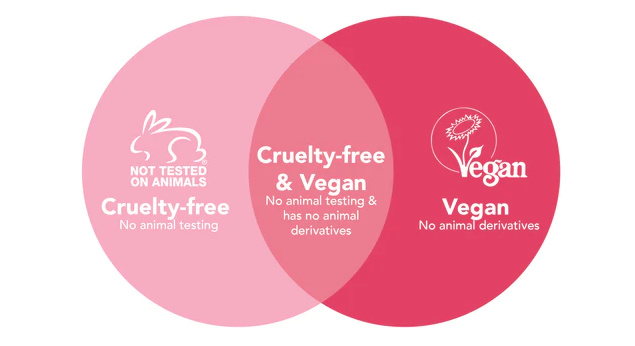 Why And How Do Certain Companies Animal-Test Ingredients and Formulas?

Originally, animal testing was done to protect human health.2 Consumers wanted safe and effective cosmetics, so as companies developed new formulas, they would test them on animals first. The reasoning for this practice was to be sure their products would have no adverse effects on humans.3

Although they aren’t required by law, several invasive tests are often performed on animals, which can include:

In the United States, a large percentage of the animals used in such testing, such as laboratory-bred rats and mice, are not counted in official statistics and receive no protection under the Animal Welfare Act.7

A Brief Look at the International Standards for Animal Testing

Animal testing regulations permit and control the use of animals for scientific experimentation. They vary greatly around the world, but most governments aim to control the number of times individual animals may be used, the overall numbers used, and the degree of pain that may be inflicted without anesthetic. Here’s a look at a few international standards for animal testing:

In the UK, all licensed establishments must have an Animal Welfare and Ethical Review Body, which considers and monitors project applications for the site. Additionally, the Animals Act of 1986 requires experiments to be regulated by three licenses, including:

To be accepted, the experiments must use “the minimum number of animals, involve animals with the lowest degree of neurophysiological sensitivity, cause the least pain, suffering, distress, or lasting harm, and be the most likely to produce satisfactory results.”8

On May 1, 2021, China implemented updates and changes to its animal testing laws. Under the new regulations, cosmetics may qualify to be exempt from their animal testing requirements but only imported general cosmetics fall under this new mandate.9, 10

While China has made changes regarding animal testing, the country has not banned or made it illegal to test cosmetics or their ingredients on animals. These new changes have only lifted the requirement for some cosmetics imported and sold in their country.11

Check out this graphic for a more detailed look at China’s cosmetic animal testing requirements: 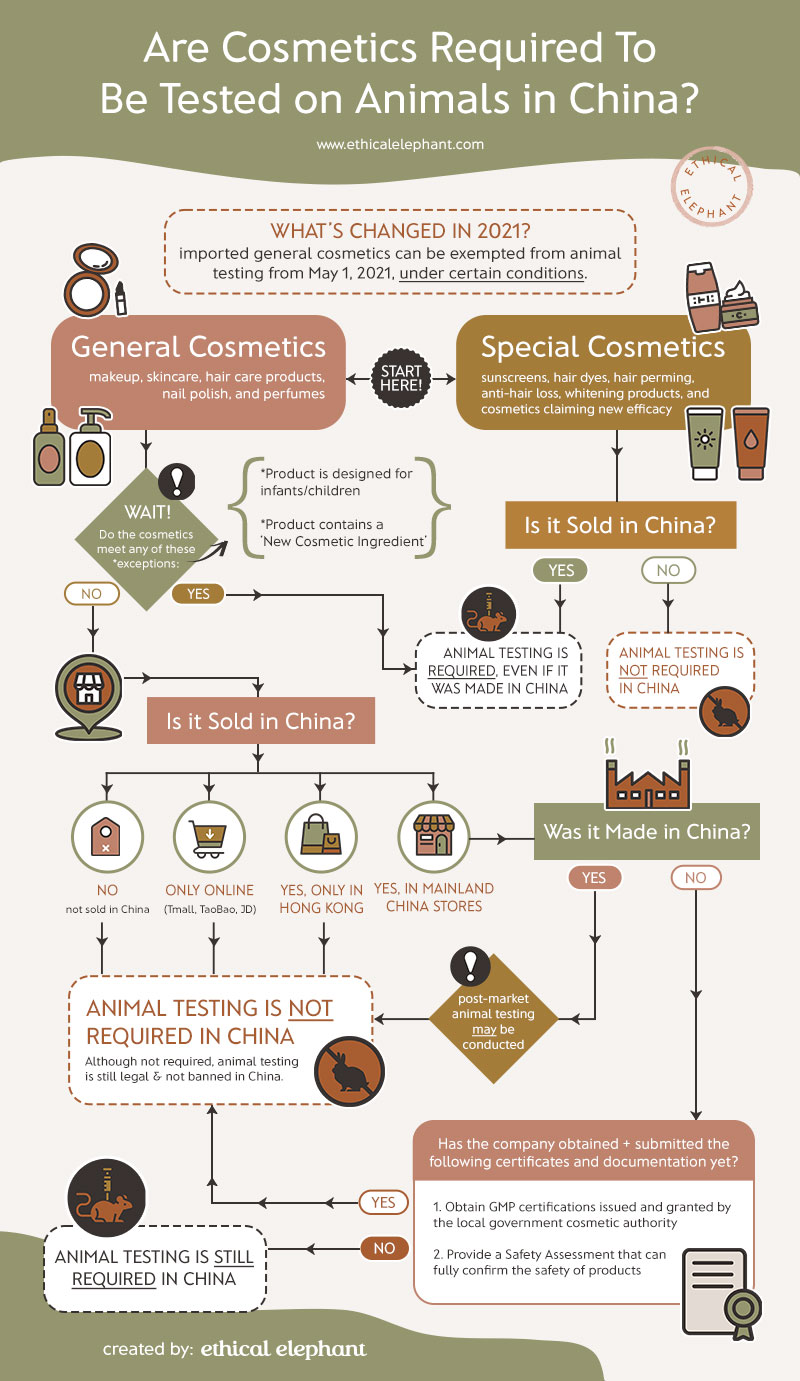 The United States of America

In the United States, animal testing is primarily regulated by the Animal Welfare Act of 1966 (AWA), which contains provisions to ensure that animals used in research receive a certain standard of care and treatment.

Currently, AWA only protects mammals. However, the fifth amendment to the AWA, specifically excluded purpose-bred birds, rats, and mice, as opposed to their wild-captured counterparts; even though most animals used in research are mice, rats, and fish.12

The AWA requires each institution using covered species to maintain an Institutional Animal Care and Use Committee (IACUC). The IACUC reviews and approves each animal use protocol, which is a written description the researchers submit describing all procedures to be done.13

Another regulatory instrument is the Office of Laboratory Animal Welfare (OLAW), which is an office within the US National Institutes of Health (NIH). OLAW oversees all animal studies funded by the Public Health Service, including the NIH.14

In addition, accreditation from the Association for Assessment and Accreditation of Laboratory Animal Care International (AAALAC) is regarded by the industry as the “gold standard,” and is maintained through site visits and program evaluations once every three years.15

Cruelty-Free Certifications to Look For

Sadly, a number of fake “bunny” type logos or symbols have been popping up on products globally, which can mislead consumers. Plus, behind the scenes, these brands could still be testing their formulations and ingredients on animals. There are three major trusted cruelty-free certifications to seek out before buying a new product: 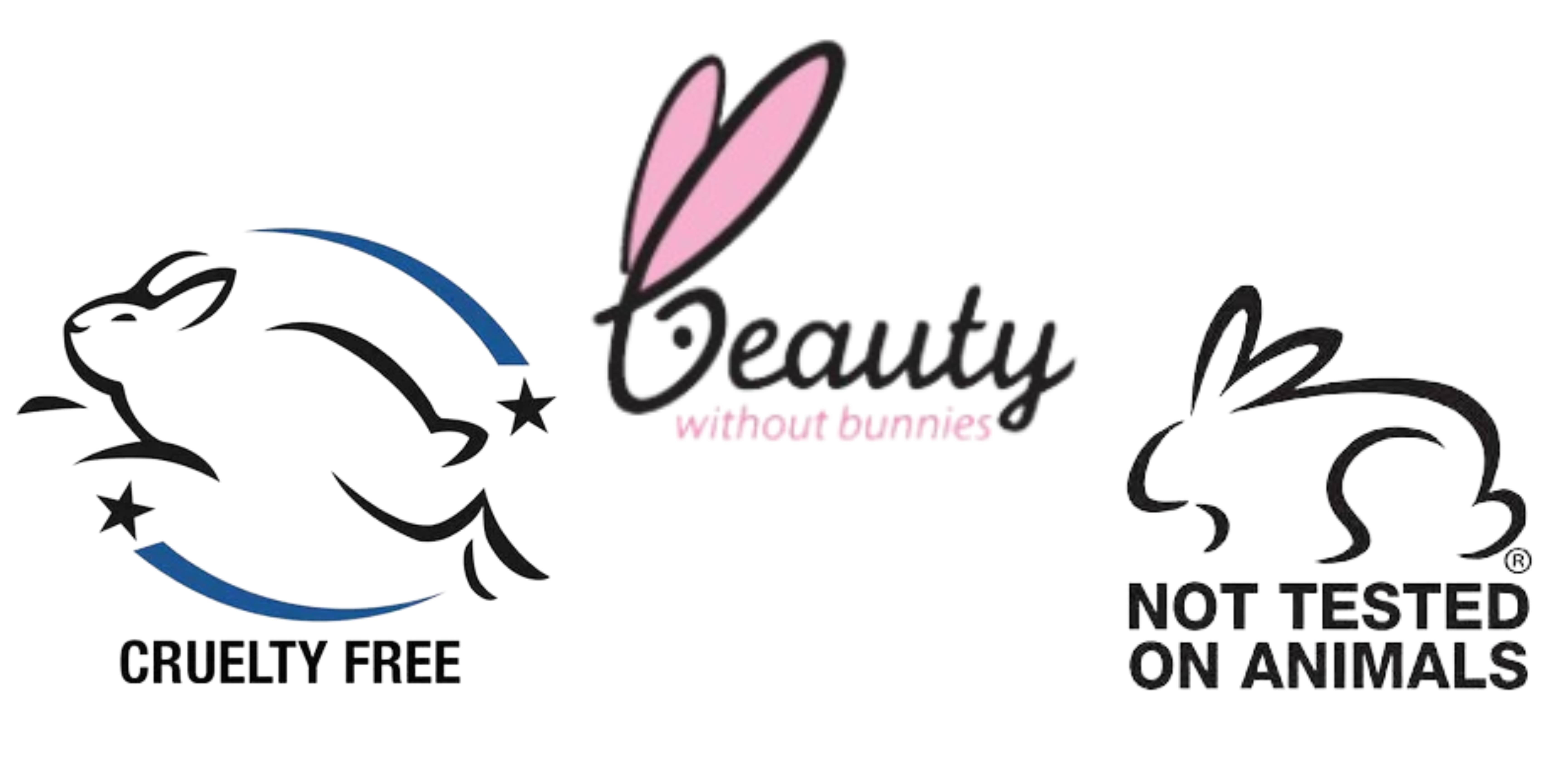 Leaping Bunny is an internationally recognized certification organization for cruelty-free brands. It requires independent audits to verify a brand’s cruelty-free claims are true and is considered the gold standard in cruelty-free certifications for personal care and household product companies. It indicates no animal testing at any stage of development.

Beauty Without Bunnies is PETA’s cruelty-free certification program. Companies are required to either sign PETA’s statement of assurance or provide a statement verifying that they don’t conduct or commission animal tests on ingredients, formulations, or finished products and that they pledge not to do so in the future.

Choose Cruelty-Free (CCF) is an independent, non-profit organization based in Australia that is against animal testing. Companies seeking accreditation must sign a legally binding contract. To be accredited, none of the company’s products and ingredients, including those provided by its suppliers, may have been tested on animals.

Even if companies are certified by Leaping Bunny, PETA, or CCF, that doesn’t mean you’ll see the cruelty-free bunny logos displayed on their packaging. Unfortunately, there is a licensing fee to use the logos, which not all companies can afford.16

However, these organizations fulfill an important function. Jane Iredale, a makeup guru and entrepreneur, says, “Certifications matter because anyone can claim to be cruelty-free, but without proof, it’s a meaningless statement.”

A Brief History of the Cruelty-Free Trend

In 1959 animal rights activist Muriel Dowding founded Beauty Without Cruelty, a charity that eventually became a manufacturer of vegan cosmetics. Dowding encouraged apparel companies to manufacture fake fur instead of butchering animals and using their hides. About a decade later, Marcia Pearson founded Fashion With Compassion, a similar organization.17

During the 80s and 90s, the “cruelty-free” language became more prevalent. In 1987 PETA launched its cruelty-free certification program and developed a long-term initiative to dissuade companies from testing personal care products on animals. They also created the Leaping Bunny Program.18

Another significant factor in the movement was consumer lawsuits against big-name cosmetic brands that lied about animal testing. In 2012 five women filed a class action suit that accused Mary Kay, Estee Lauder, and Avon of false claims regarding their “cruelty-free” products. The companies had compromised their values to access the Chinese market.19

Between 2012 and 2017, interest in the cruelty-free movement spiked, according to Google Trends data. After decades of sustained efforts from organizations such as PETA and Cruelty-Free International, many countries banned animal testing. The European Union and Israel were some of the first, followed by India.19

Humanist Beauty believes that there isn’t a reason for the inhumane treatment of animals for the sake of cosmetics products, which is why we made the effort to be Leaping Bunny Cruelty-Free Certified.

While logos, symbols, and labels can be confusing when it comes to cruelty-free and vegan products, you can be 100% certain that all Humanist Beauty formulas are cruelty-free, including Herban Wisdom products, which are also vegan.

You can shop all Humanist Beauty products here.