Plants have many surprising qualities, some of which have led scientists to consider whether plants have feelings or possess some degree of intelligence. In fact, plants can regenerate when 90% of their bodies have been eaten away and communicate with approximately 20 more senses than an animal. This blog will dive into plant intelligence, how Venus fly-traps count their prey, Dr. Monica Gagliano’s “Sensitive Plant” study, the Wood Wide Web, and Charles Darwin’s “Root Brain Theory.”

What Is Plant Intelligence?

Plant intelligence skeptics often analyze just what intelligence is and if it can be applied to the reactivity plants display in response to stimuli. Here are a few characteristics of intelligent life that have been used in the context of plant activity:

Some botanists have proposed that plants can learn and store this knowledge as a memory that guides future behavior. While many studies have been administered, these are some of the most influential findings that led to the theory of plant intelligence:

In one famous case, recounted in author Michael Pollan’s 2013 essay “The Intelligent Plant,” University of Missouri researcher Heidi Appel played a recording of a caterpillar chewing on leaves next to another plant.

Heidi discovered that the living plants reacted in the same way to the sound of chewing as they did when they had their own leaves chewed on. They produced volatile defensive chemicals that would normally deter a caterpillar.1 When caterpillars attack corn and lima beans, for example, the plants emit a scent that attracts parasitic wasps that feast on caterpillar innards.

In another experiment, leaves were clipped off of growing sagebrush plants. Soon after, the sagebrushes emitted a chemical response that was not only picked up by other parts of the plant being clipped but also by other plants in the region, which then emitted a similar response.2

Additionally, researchers in China planted pairs of tomato plants in pots, then wrapped them tightly in plastic so their connection could only be through their roots. One plant in each pair was injected with blight; after 65 hours, the other was injected.

It was found that the plants injected after 65 hours were much less likely to contract blight. This result led to a fascinating inference: Plants infected later were better able to stave off blight as information had been transmitted through their roots, mediated by beneficial fungi that connect one plant’s root system to the other’s.3 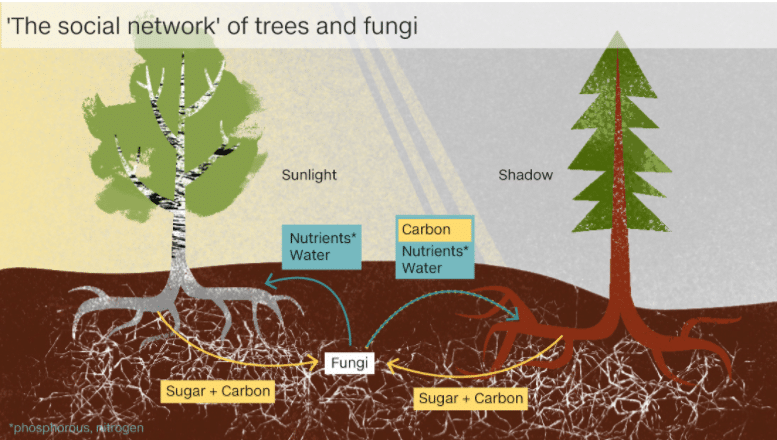 Pictured: An illustration of the Wood Wide Web   Source: Ecowatch

Trees secretly talk to each other underground; they’re passing information and resources to and from each other through a network of mycorrhizal fungi— mykós means fungus and riza means root in Greek — a mat of long, thin filaments that connect an estimated 90% of land plants.

Professor Thomas Crowther and his team of scientists from The Crowther Lab at ETH Zurich, Switzerland used machine learning to map out the complex network of fungi and bacteria that link trees together. This connection was first discovered by Suzanne Simard from The Mother Tree Project in her 1997 Ph.D. thesis.

The researchers found that nutrients were being passed by the fungi between different species of trees over a large area, being coined the “Wood Wide Web.” Tree species that were less equipped for winter, like aspens, were being given food manufactured by the conifers. This process is reversed during the summer. Essentially, the fungus is actually helping to distribute food amongst forest trees so that they all benefit at the right time.

Messages about predators were also sent. If a tree was attacked by insects, for example, pheromonic chemicals were distributed through the mycorrhizal fibers beneath the soil. The trees also released the chemicals into the air, being blown by the wind to warn other trees that an insect attack was imminent and to prepare themselves by producing more tannin.

The revelation of the Wood Wide Web’s existence, and the increased understanding of its functions raises big questions — about where species begin and end; about whether a forest might be better imagined as a single superorganism, rather than a grouping of independent individualistic ones; and about what trading, sharing, or even friendship might mean among plants.4

Can A Venus Fly-Trap Count? The well known Venus fly-trap, which captures and consumes a variety of small flying insects, has already been acknowledged as an astounding plant. However, researchers have now determined that these carnivorous plants can actually count up to five.5

In their study, published in the journal Current Biology, the researchers show that when the tiny hairs that cause the plants’ trap-like jaws to close are stimulated, they cause electrical pulses within the plants.

The plant then detects, or rather counts, the number of electrical pulses and uses the information to figure out when to close the trap and how much digestive enzymes it should secrete to dissolve its prey.6

Carefully examining the plant’s behavior has shown that the Venus fly-trap choreographs its response to invaders with remarkable efficiency in five simple steps:

Here’s a video created by the scientists that sums up the steps a Venus fly-trap takes to count. 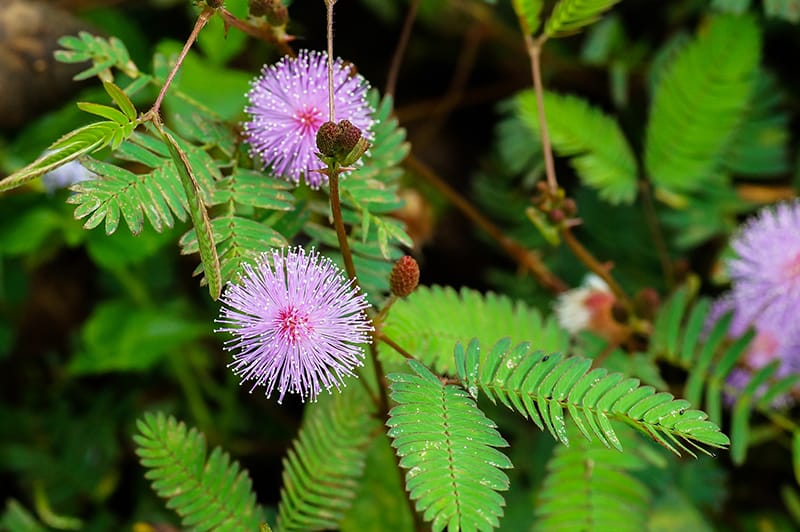 Gardeners call Mimosa pudica “the sensitive plant,” due to the fact that if you even lightly touch it, within seconds, it folds its leaves into what looks like a frightened or defensive curl. You can view a video of the plant acting “shy” as it’s touched here.

By using the same experimental framework normally applied to test learned behavioral responses in animals, Dr. Monica Gagliano from the University of Western Australia and her colleagues have successfully demonstrated that Mimosa pudica can learn and remember just as well as the learning that is expected of animals.

The researchers trained Mimosa pudica‘s short and long-term memories under both high and low-light environments by repeatedly dropping water on them using a custom-designed apparatus.

It was found that Mimosa pudica plants stopped closing their leaves when they learned that the repeated disturbance had no real damaging consequence. The plants were able to acquire the learned behavior in a matter of seconds.

Most remarkably, these plants were able to remember what had been learned for several weeks, even after environmental conditions had changed.

“Astonishingly, Mimosa pudica can display the learned response even when left undisturbed in a more favorable environment for a month. This relatively long-lasting learned behavioral change as a result of previous experience matches the persistence of habituation effects observed in many animals,” the researchers wrote in a paper published online in the Oecologia Journal.

“Plants may lack brains and neural tissues but they do possess a sophisticated calcium-based signaling network in their cells similar to animals’ memory processes,” they explained.

Dr. Monica Gagliano and her colleagues concede that they do not yet understand the biological basis for this learning mechanism, nevertheless, their set of experiments has significant implications. The study radically changes the way we perceive plants and the boundaries between plants and animals, including our definition of learning as a property special to organisms with a nervous system.

One of Darwin’s most interesting and controversial proposals about the vegetal world comes in the final paragraph of his final work on the subject. The book, titled The Power of Movement in Plants, was published in 1880; it drew on a wealth of experiments he had conducted on beans, peas, corn, and other species grown in a hot-house in his garden.

Within the paragraph in question, Darwin wrote: “I believe that there is no structure in plants more wonderful, as far as its functions are concerned, than the tip of the radicle.” (Note that “radicle” is another word for root.)

Known as the “Root-Brain Theory,” Darwin found that the tip of the root acted like a brain, or command center, and directed several movements.  Through a variety of interventions, he was able to show that the root tip exhibited what he called a “diverse kind of sensitiveness.” It responded to gravity, contact, moisture, and light and could distinguish between soft and hard items.

The root tip also seemed to weigh the different forces acting on it. It was constantly being subjected to varying pressures, gradations of illumination and dampness, and so on. It would process this information and choose the best way to proceed with its growth.

The intelligence of the radicle can be summed up as follows: it senses a range of information about its environment,  integrates this information and arrives at a “decision”, and then transmits signals to other parts of the plant. In this way, it seems to direct how the plant behaves and deciphers information.7

With scientific backing and new and old studies, a fresh paradigm is being born that requires us to rethink the relationship between plants and intelligence. After all, plants “fight” for territory; they “seek” food, and “hunt” and capture prey. They seem to grow “with purpose,” meaning they have spatial awareness. They also know how to grow and thrive within a community by being responsible community members and contributing to the common good.

Have you ever witnessed proof of plant intelligence? Let us know in the comments!