You may have heard of Schisandra as a super ingredient that is loved and praised by health enthusiasts. The adaptogen is often ingested as a supplement or added to smoothies as a way to bring the mind and body to equilibrium. Schisandra, also known as Chinese Magnolia Vine, Five Flavored Fruit, and Wu Wei Zi, is a woody vine that produces red berries in the forests of Northern China and the Russian Far East. It’s considered a Harmonizing Tonic or “King” remedy beneficial to qi in Traditional Chinese Medicine (TCM) due to its well balanced energetic nature. In this blog, we’ll discuss the history of Schisandra, along with its medicinal and skincare benefits.

How Schisandra Gained Its Names

Schisandra berry’s Chinese name, Wǔ Wèi Zi, means “Five Flavor Fruit.” It earned this name as it’s the only fruit known to contain all five fundamental tastes — bitter, pungent, salty, sour, and sweet. According to TCM theory, this unique composition supports the five Zang Organs, or the liver, kidneys, heart, lungs, and spleen. This cooperative of Zang Organs produces and stores qi, the vital energy or life force that flows through all living things.1

The western botanical name, Schisandra, comes from the genus Schisandraceae, which was named by French botanist André Michaux in his Flora Boreali-Americana, published in 1803. Sometimes it’s incorrectly spelled Schizandra, which is a misunderstanding of origin. According to the American Herbal Pharmacopeia, “The name Schisandra is derived from the ancient Greek schisis meaning “crevice” or “fissure.”

Many writers have incorrectly written this as Schizandra presumably from the Greek schizo meaning “split” or “separate” which has resulted in inconsistencies in the literature. This is further confused as the Manual of Cultivated Trees, which was published in 1954, reported that the name Schisandra was in fact based on the verb schizo.”2 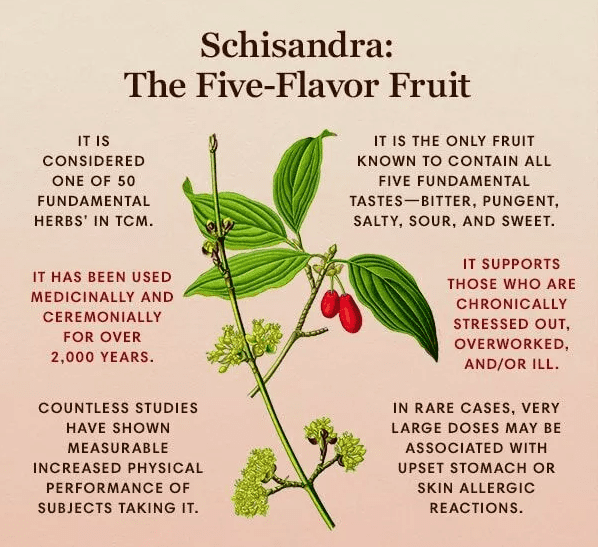 The Historical and Cultural Significance of Schisandra

Indigenous peoples of the Asian continent have used Schisandra berries medicinally and ceremonially since before recorded history – over 2,000 years. To make use of all the benefits, the Schisandra berries were most commonly dried in the sun and consumed as part of food and medicinal practices.

TCM says that Schisandra berries “calm the heart and quiet the spirit.” Indigenous Siberian hunters, known as the Nanai, have traditionally consumed the Schisandra plant’s berries to help improve stamina and reduce fatigue in the rugged terrain during the long winter months.3

Recorded use of Schisandra dates back to the Tang dynasty, described in China’s first known herbal encyclopedia: Shen Nong Ben Cao Jing, or The Divine Farmer’s Materia Medica, written and compiled between about 200 and 250 CE. It’s considered one of “50 Fundamental Herbs” in TCM. Chinese, Korean, and Russian cultures have used its berries in a number of ways; in beauty tonic blends, as an ingredient in soups and stews, and infused into wines.

Awareness of Schisandra reached the European and American countries relatively recently; the first monograph on it can be found in The American Pharmacopoeia from 1999.4 Today, Schisandra is a popular ingredient in skincare products and foods, shining a light on the berries’ myriad of benefits.

Schisandra berries are known to have a wide range of health benefits and have been used in traditional medicine to treat a number of illnesses. From helping to heal yourself by clearing toxins out of your body to aiding with specific maladies, the medicinal benefits are nearly endless.

Aid Those Suffering From Alzheimer’s Disease

Schisandrin B is a mineral found in Schisandra berries, which may have a positive effect on Alzheimer’s disease. A recent study found that Schisandrin B has the ability to block the formation of peptides in the brain.5

The specific peptide, amyloid-beta, is found in excessive amounts in all Alzheimer’s sufferers. Schisandrin B is an anti-inflammatory mineral, which can assist further to reduce neurotoxicity and the severity of Alzheimer’s disease.6

Schisandra was studied by Russian scientists and shown to provide an increased physical working capacity. The study’s findings found that Schisandra can create a stress-protective effect in animals. This included protection from heat shock, frostbite, immobilization, irradiation, and heavy metal intoxication.7

Schisandra has been used for centuries in oral form as a relaxant. Studies conducted showed an increase in blood circulation by relaxing cardiac blood vessels. This results in lower blood pressure and ties in with a reduction in stress.8

Be Effective Against Liver Damage

One study showed that the Schisandra Chinensis Pollen Extract (SCPE) had an antioxidant effect on carbon tetrachloride (CCI4) toxins in the liver. The higher antioxidant activities and the abundance of polyphenols found in SCPE was also proven to be effective against liver damage caused by Nonalcoholic Fatty Liver Disease.9,10

Nonalcoholic fatty liver disease (NAFLD) can be the result of numerous liver diseases, such as hepatitis and cirrhosis. There are more fatty acids and inflammation of the liver in people with NAFLD. Researchers found that Schisandrin B reduced these fatty acids, while also acting as an antioxidant and anti-inflammatory agent.

A randomized controlled trial completed at the end of 2016 showed that Schisandra can reduce the severity of menopausal symptoms. It concluded that Schisandra is effective and safe at minimizing hot flashes, sweating, and heart palpitations.11

Be Effective Against Asthma

A study from Korea published in 2014 found that Schisandra berries exert anti-asthma properties. The berries do this by inhibiting immunoglobulins, which are antibodies that incite allergy reactions. The berries also temper hyper-responsiveness by the body. This hyper-responsive effect to allergens is what causes airways to spasm and close, creating asthma attacks.12

Work As An Energy and Adrenal Tonic

Schisandra has long been prized for its energizing and vitality-enhancing properties. Countless studies have shown the measurable increased physical performance of subjects taking it. Since it’s a tonic herb, it can strengthen and tone many organs in the body, benefiting the flow of qi.13

Schisandra can increase the contractibility of the heart and enhance the exchange of oxygen in the tissue cells. This ultimately means your muscles will enhance the utilization of oxygen and improve the gaseous exchange in the lungs and in peripheral cells to reduce the production of acidic metabolic waste while simultaneously increasing the removal of acidic waste in the cells, blood, and lungs.14

There is a significant amount of evidence, in conjunction with its long-standing traditional use as a tonic, that as an adaptogen, Schisandra can be effective against stress and depression. Adaptogens are substances believed to reinforce the nonspecific resistance of the body against physical, chemical, or biological stressors.

Schisandra is most well-known in the West as an adaptogen facilitating a response to unproductive stress by modulating endocrine and immune functions. As an adrenal-cortical restorative, Schisandra can overcome the chronic loss of stamina, fatigue, over-work and chronic illness.15

For millennia, Schisandra has been known as a herb that promotes longevity and acts against aging. Schisandra’s berries are rich in antioxidants, but they also have an anti-inflammatory effect on the body. Both of these actions help to improve cellular function and promote a longer life. In TCM, the ability of Schisandra to promote longevity and vitality is attributed to its tonification of the three treasures: qi, Jing (essence), and Shen (spirit).

Schisandra has an array of medicinal benefits that have been touted for centuries; however, it has also been highly regarded for its potential skin benefits in China, especially among the wealthy. The berries were used to promote beautiful skin and provide protection from sun and wind damage.

Packed with anti-inflammatory and antioxidant properties, including key vitamins C and E, Schisandra’s strong astringent qualities enable the skin to hold in moisture for more fullness. Additionally, its action on the liver can largely be attributed to improvements in skin issues including hives and eczema.

In general, Schisandra’s benefits on the skin can include: 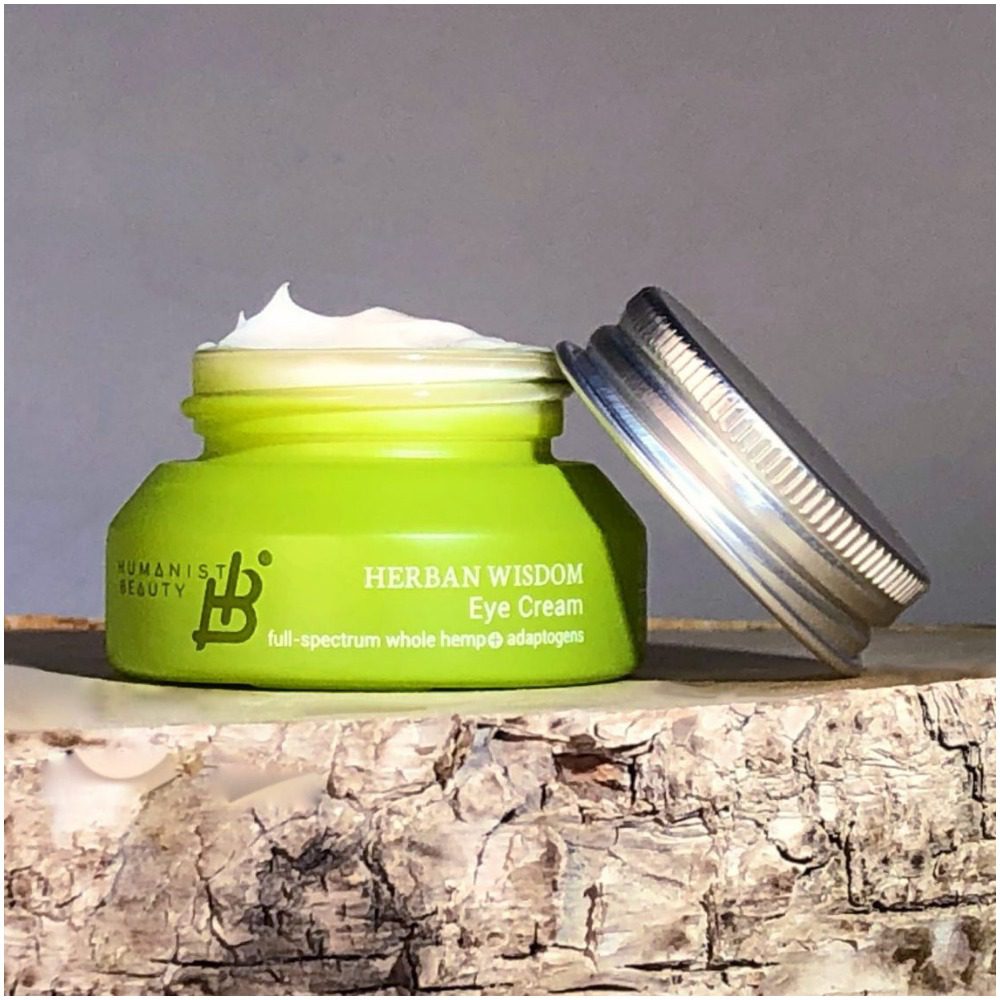 Schisandra berry extract is integrated into the Humanist Beauty Herban Wisdom® Eye Cream for its adaptogenic, antioxidant, anti-inflammatory, tonic, and astringent properties to promote overall skin wellness and to keep your skin looking and feeling its absolute best.

Remember: Your eyes are the windows to your soul, so take special care of them so they can convey the happiness and joy you feel inside.

You can learn more about the Humanist Beauty Herban Wisdom® Eye Cream here.