The Rites Of Spring

Spring has long stood for birth or rebirth, bloom, and flourishing, which is why an array of ancient structures, such as the Stonehenge in The United Kingdom and the Pyramid of Kukulkán in Mexico were built. They were used as a place where ancient civilizations could celebrate spring’s lively beauty with shows of natural light touching and passing through the structures. Today, spring celebrations around the world are grand and usually branch from the traditions of these ancient civilizations. In this blog, we will explore the widely-celebrated holiday of Easter and some of the most unique spring traditions around the world. 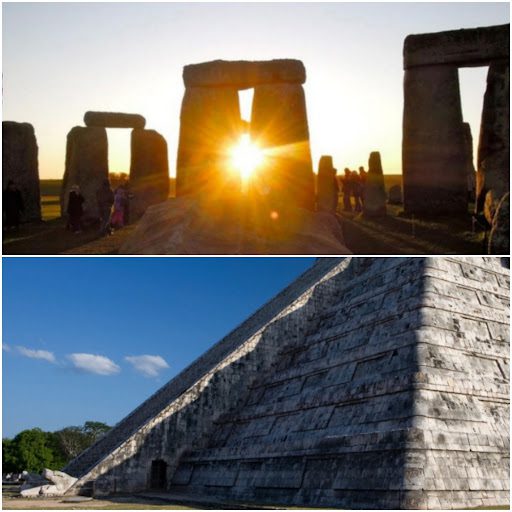 Pictured: Top: Spring equinox sunlight shines perfectly through two rocks at the Stonehenge (Your Sun);  Bottom: Light from the spring equinox at the Pyramid of Kukulkán creates the shape of a snake slithering down its edges (The Culture Trip)

The Origins of Easter

During April, Christians around the globe celebrate Easter, the day on which the resurrection of Jesus is said to have taken place. The date of the celebration changes from year to year due to Easter always falling on the first Sunday after the first full moon following the spring equinox. In 2022, Easter will be celebrated on April 17th.

The naming of the celebration as “Easter” seems to go back to the pre-Christian goddess in England, Eostre, who was celebrated at the beginning of spring by Pagan Anglo-Saxons in medieval Northumbria. The only reference to Eostre and these honorings comes from the writings of The Venerable Bede, a British monk who lived in the late seventh and early eighth century.

However, Emperor Constantine is responsible for how Easter is viewed today. Constantine believed that Easter shouldn’t be connected to other faiths, hence he ordained that the holiday should be celebrated on the Sunday after the first new moon of spring when Jesus was said to have been resurrected, which also helped to spread Christianity.

Whether you’re celebrating Easter by attending a sunrise church service in the U.S., eating a traditional breakfast in Europe, or fasting from animal products in Africa, the occasion is honored by Christians all over the globe to remember Jesus Christ and his actions.

Here are a few common Easter symbols and traditions:

While the cross was initially looked upon as a symbol of suffering, Christians began to associate the cross with Christ’s victory over death. Constantine, during his rule, made the cross the official symbol for Christianity, which in turn made it an important symbol during Easter.

The hare is an ancient Pagan symbol of fertility and symbolizes the moon, which plays a central role in Easter. The burrow of the rabbit signifies the tomb of Christ from which he rises. Traditionally, to honor the Easter Bunny, children used to make nests for rabbits in hats or paper baskets and put them out for rabbits to find. That tradition has evolved into one practiced today, where children search the entire house for a basket full of treats the Easter Bunny has hidden for them.

Eggs have always been revered as a symbol of life. Ancient cultures, like that of the Hindus, Persians, Egyptians, and Phoenicians, believed that our world originated from a large egg. During springtime, most ancient cultures celebrated spring by gifting and eating dyed eggs, which is still a common practice around the world.

For Christians, the Easter egg symbolizes the tomb of Jesus from where he arose, in a new light and a new life. The egg is also deeply connected to Lent, considering many regions forbade the consumption of eggs during that time. Since Easter happens after Lent, eggs were most likely a coveted food due to the lack of consumption throughout Lent.

When Christ arrived in Jerusalem, also known as the first Palm Sunday, people welcomed him by waving palm branches. The remembrance of that significant event is carried forward to this day. In fact, images, candies, and other goodies are made to look like palm branches during Easter. It’s also common for some Christian denominations to hand out palm branches that have been blessed by the priest to the congregation, who will then make them into crosses.

For many, hot cross buns are a favorite item of the Easter feast. According to the origin story, an Anglican monk baked the buns and marked them with a cross in honor of Good Friday. Over time they gained popularity, and eventually became a symbol of Easter weekend.

Despite the strong Catholic character of modern Poland, some Pagan traditions have endured; such as the spring equinox celebration known as the Drowning of Marzanna (Topienie Marzanny). Marzanna is the Polish incarnation of the old Slavic goddess of winter, plague, and death.

In medieval times, the rite involved making a Marzanna effigy out of straw which was then wrapped in linen and beautified with ribbons and beads. On the afternoon of March 21st, the first day of spring, young children would dunk the doll in every trough and water barrel in the village. At dusk, the villagers would gather at the riverbank, setting the doll ablaze and tossing it into the water.

After the flames were extinguished, the doll would be removed from the water and paraded back through the village. Post-drowning Marzanna is usually carried by girls, who walk from house to house; celebrating with dancing, singing and, in some instances, collecting donations for the church or charity.

Today, many children in primary school still participate in the annual creation of a Marzanna doll by making figures out of old clothes and sticks that range in size. On March 21st, Marzanna is still taken to the nearest riverbank or bridge, set ablaze and thrown in the water as the children sing songs, such as: 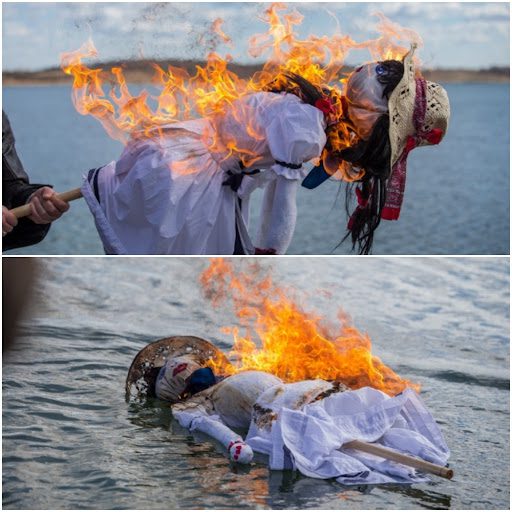 Bulgarians personify the month of March as an old female who brings small presents, referred to by the name of Baba Marta (Grandma March). Every toddler knows that Baba Marta is a charming old lady who chases away the cold and grumpy February. She invites the sun, the flowers, and the birds for a new season of bustling life. The colors of the month are red and white, symbolizing passion and purity.

During the weeks preceding March 1st, Bulgarians pack city streets with hundreds of stalls selling all kinds of Martenitsa, which are yarn threads in white and red that Bulgarians give as a gift to loved ones. A typical Martenitsa consists of two woolen dolls tied up together– Pizho and Penda. Pizho is all made of white wool, while Penda is all in red.

According to the tradition, you cannot throw away your Martenitsa until you see a stork or a sparrow. These two bird species spend the winter in Africa and fly back to Bulgaria in mid-March. 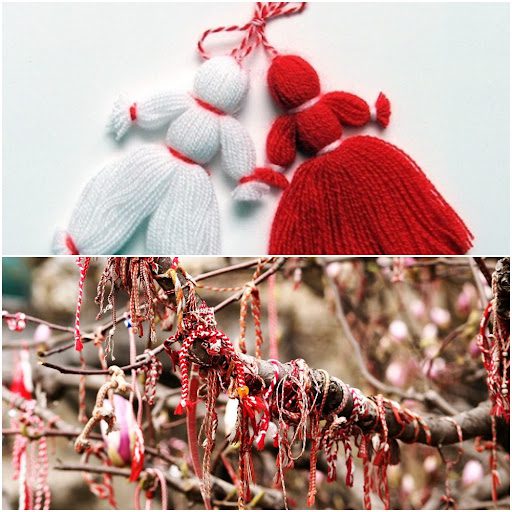 With the throwing of colored powder and water balloons, Holi has become known as India’s most vivid, joyous festival. It has been celebrated in India for more than a millenium, with poems documenting celebrations dating back to the 4th century CE. Holi marks the beginning of spring after a long winter, symbolic of the triumph of good over evil and is celebrated in March, corresponding to the Hindu calendar month of Phalguna.

There are varying accounts of Holi’s origin mentioned in several works of ancient Indian literature. According to one version, an evil king became so powerful that he forced his subjects to worship him as their god. But the king’s son, Prahlada, continued to be a devotee of the Hindu deity Lord Vishnu. The king then plotted with his sister, Holika, to kill his son. Holika, who was immune to fire, tricked Prahlada to sit in a pyre with her. When it was lit, the boy’s devotion to Lord Vishnu helped him walk away unscathed while Holika, from whom the festival derives its name, was burned to death despite her immunity.

Today, on the eve of the festival, large pyres are lit in many parts of India to signify the burning of evil spirits. People often throw wood, dried leaves, and twigs into the fires. On the day of Holi, entire streets and towns turn red, green, and yellow as people throw colored powder into the air. Each color carries a meaning; red, for example, symbolizes love and fertility, while green stands for new beginnings.

It’s also common to splash each other during the celebration of Holi. Water guns are used to squirt water, while balloons filled with colorfully dyed water are also flung from rooftops. Later in the day, families gather together for festive meals and, sometimes, sweets are distributed among neighbors and friends. 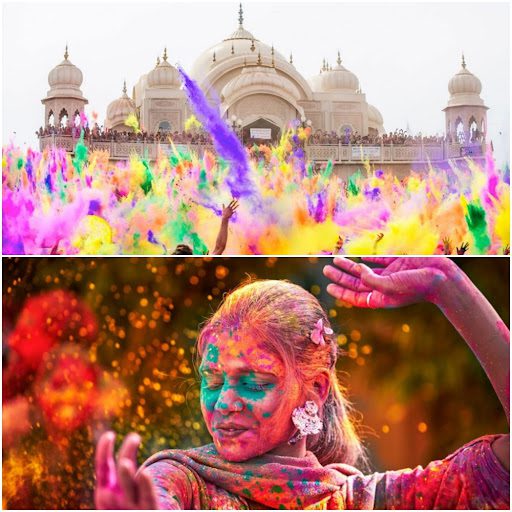 Whuppity Scoorie is a traditional festival dating back to the early 19th century and is observed by the people in Lanark, Scotland to celebrate the approach of spring. On March 7th, children gather around St. Nicholas Kirk to run clockwise around the church, making noise and swinging paper balls on strings above their heads.

Today, the running during Whuppity Scoorie is no longer a race for safety reasons and to increase fairness for the younger participants. After three laps, the children scramble for coins thrown by members of the Community Council who host the event. The Community Council also hosts a “Whuppity Scoorie Storytelling Festival” and an art workshop for a few days after the event.

While the origins of Whuppity Scoorie are unknown, there are theories that try to explain how the ancient custom evolved. The most common theory is that Whuppity Scoorie came from a festival that was intended to celebrate spring and frighten off winter or evil spirits. Others believe it marks the time when days got longer, which allowed curfews to be lifted so children could play outside for an extended period.

Another concept connects the event with an ancient religious penance in which the penitents were whipped three times around the church and afterwards “scoored” (or washed) in the nearby River Clyde. 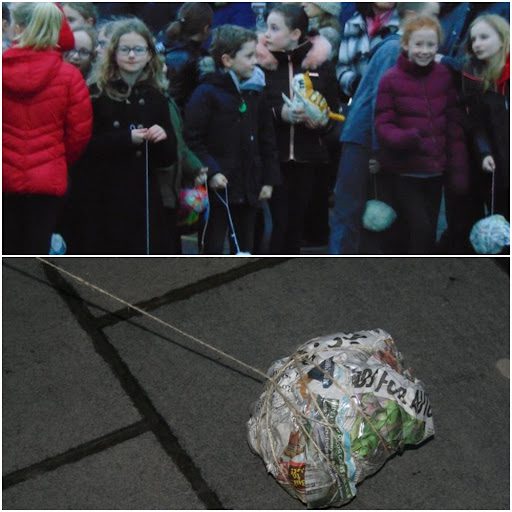 Hanami is the ancient tradition of enjoying the blooming cherry (sakura) and plum (ume) blossoms in parks and throughout the countryside of Japan. The ideal time to celebrate the Hanami festival, which coincides with the blooming forecast, is the end of March through the beginning of May.

During ancient times, the blooming cherry blossoms marked the beginning of the spring planting season. From this, the Japanese believed there was a relation between the flower and the rice paddy god, Tanokami. In fact, the cherry blossom is called sakura; “sa” referred to Tanokami, and the word “kura” meant “a seat for god,” so sakura could be understood as “a sacred place for the rice paddy god to dwell.”

Farmers would also pray, make offerings, and have a feast, believing that the cherry blossom trees would bring a full harvest. This changed into a festival for enjoying cherry blossoms in the Nara period (710-794 AD). During the Heian period (794-1192 AD), the cherry blossom flower became a national image to the Japanese, and in the Edo period (1603- 1868 AD), citizens started having banquets under the trees.

Today, Hanami festivities include gathering under cherry blossom trees to celebrate spring with food and drinks. While Hanami can be celebrated at any time during the day, evening parties are referred to as Yoakuraz, translating to “night sakura.” They often include paper lanterns that are hung among the trees, which bring a new perspective and beauty to the cherry blossoms. 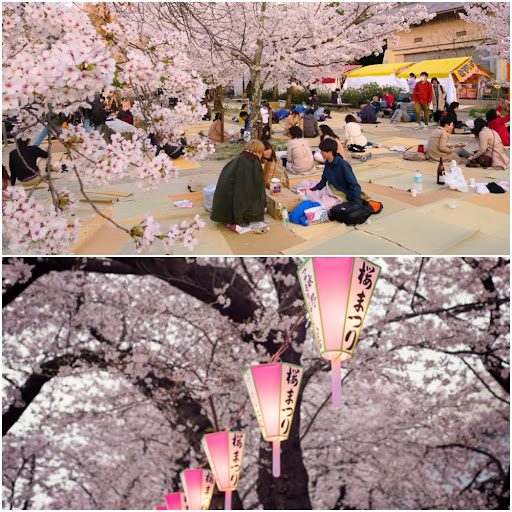 During spring, nature brings life back to Earth; dormant plants begin to grow, new seedlings sprout out of the ground, and hibernating animals awake. Nature becomes vibrant and alive once again.

Spring traditions, rituals, and symbols have evolved over time, each celebrating the revival of spring through unique festivities. While many have stemmed from ancient tradition, the newer celebrations are just as meaningful and transcendent.

How will you celebrate spring? Does your family have any unique traditions?