Things To Know About Climate Change

Climate change refers to long-term shifts in temperatures and weather patterns. These shifts may be natural, such as through variations in the solar cycle. But since the 1800s, human activities have been the main driver of climate change, primarily due to burning fossil fuels like coal, oil, and gas. Climate change has many reported detrimental effects on our planet, so the call for action to change human behavior is critical.

The Causes of Climate Change

Since the Industrial Revolution, human activities have released large amounts of carbon dioxide and other greenhouse gases into the atmosphere, which has adversely impacted Earth’s climate. However, natural processes, such as volcanic eruptions, also affect the Earth’s climate. 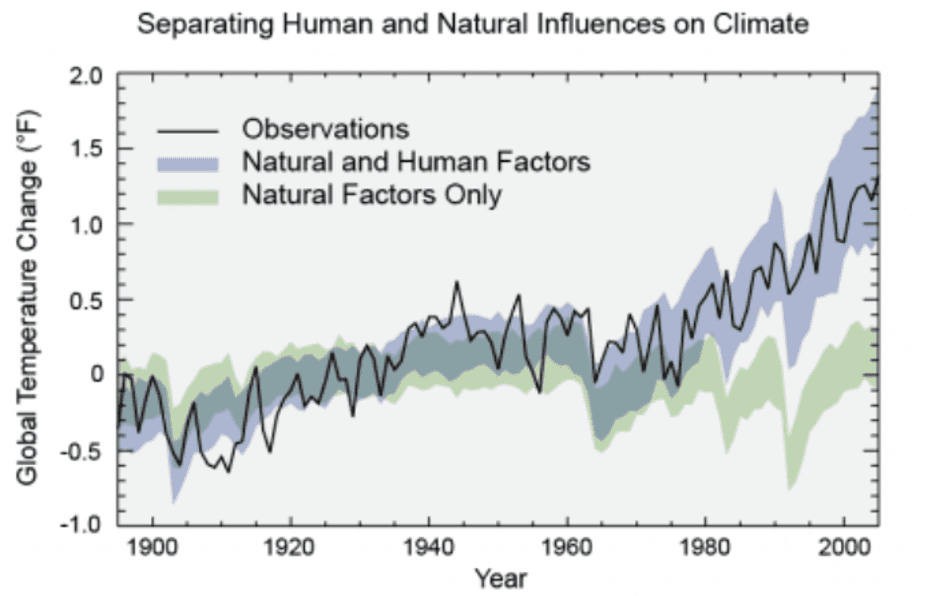 Causes, both human and natural, that combine to the acceleration of climate change are:

Concentrations of greenhouse gases have increased since the Industrial Revolution due to human activities. Carbon dioxide, methane, and nitrous oxide concentrations are more abundant now in the earth’s atmosphere than any time in the last 800,000 years.1 These emissions have increased the greenhouse effect and caused the earth’s surface temperature to rise. It’s been scientifically proven that burning fossil fuels changes the climate more than any other human activity.2

Greenhouse gases to be aware of are: 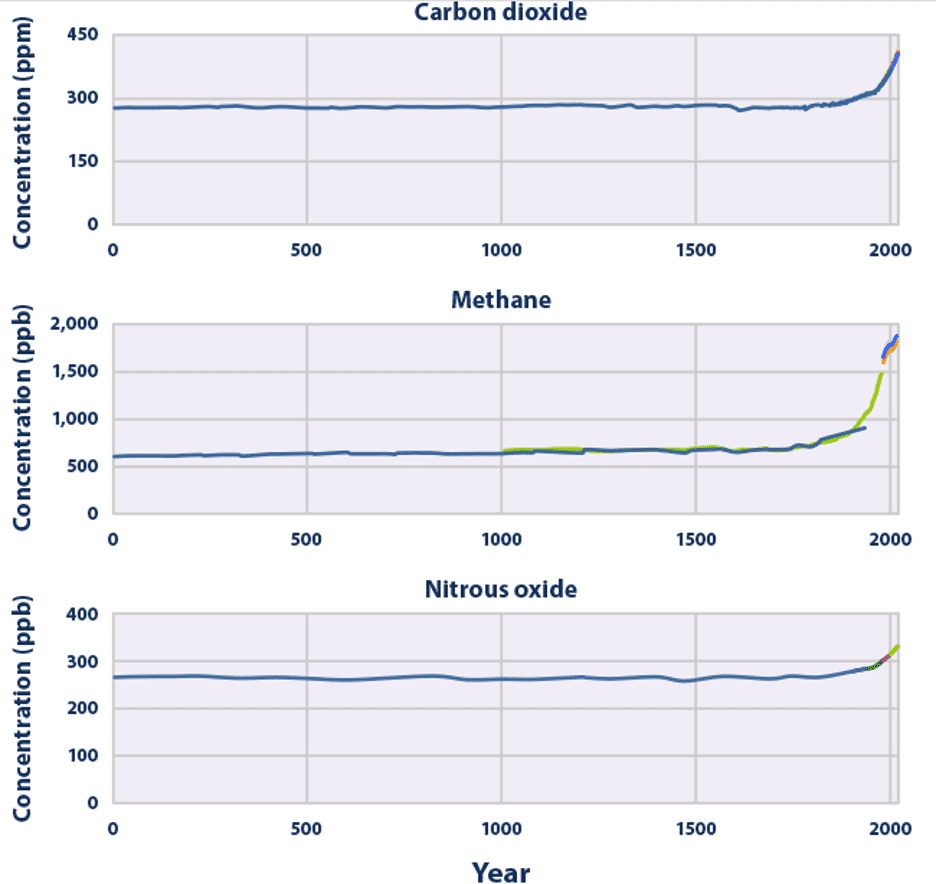 Reflectivity or Absorption of the Sun’s Energy

Activities such as agriculture, road construction, and deforestation can change the reflectivity of the earth’s surface, which leads to local warming or cooling. This effect is observed in heat islands, which are urban centers that are warmer than the less populated areas. Buildings, pavement, and roofs tend to reflect less sunlight than natural surfaces, causing these areas to be warmer.

Emissions of small particles, known as aerosols, into the air can also lead to reflection or absorption of the sun’s energy. Many types of air pollutants undergo chemical reactions in the atmosphere to create aerosols. Overall, human-generated aerosols have a net cooling effect on the Earth. 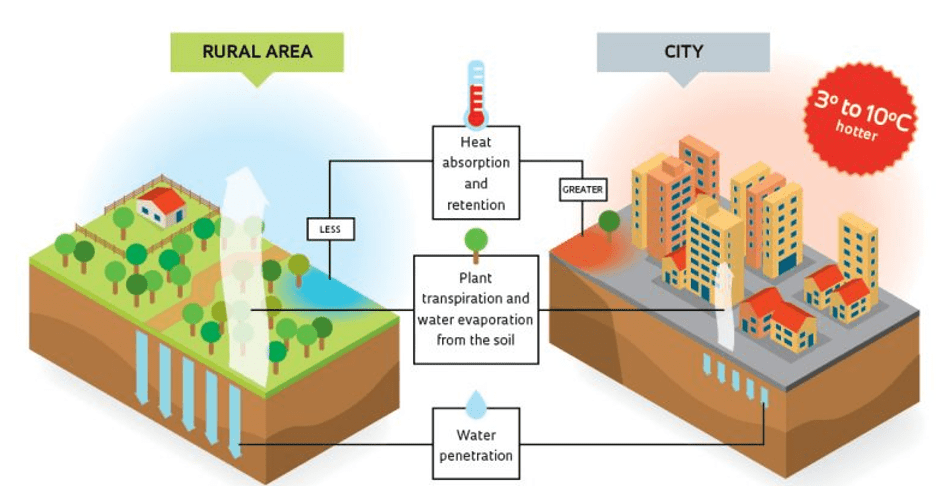 Changes in the Earth’s Orbit and Rotation

Changes in the Earth’s orbit around the sun and the tilt and wobble of the Earth’s axis can lead to cooling or warming of the Earth’s climate because they affect the amount of energy the planet receives from the sun. These changes, known as Milankovitch cycles, cause climate changes on time scales of thousands of years. For example, the amount of summer sunshine in the Northern Hemisphere, resulting from changes in the planet’s orbit, appears to be the primary cause of past cycles of ice ages.  At the coldest part of the last glacial period (or ice age), the average global temperature was about 11°F colder than it is today. At the peak of the last interglacial period, however, the average global temperature was at most 2°F warmer than it is today.7 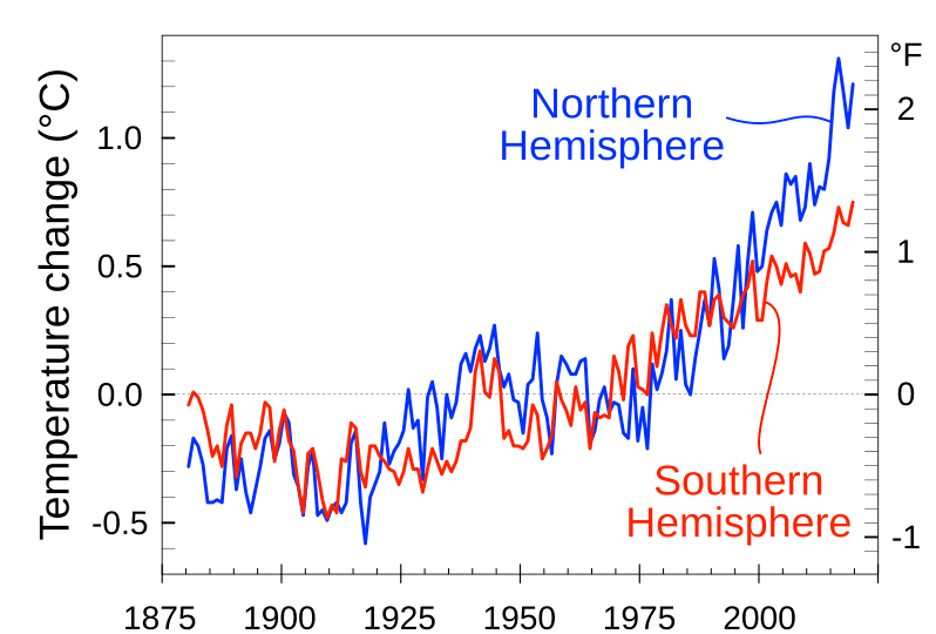 Volcanoes have played a noticeable role in climate, with recent eruptions releasing large quantities of carbon dioxide. Some explosive volcano eruptions can throw particles into the upper atmosphere, where they can reflect enough sunlight back to space to cool the surface of the planet for several years. These particles are an example of cooling aerosols.

Volcanic particles from a single eruption do not produce long-term climate change because they remain in the atmosphere for a much shorter time than greenhouse gases. In addition, human activities emit more than 100 times as much carbon dioxide as volcanoes each year.8 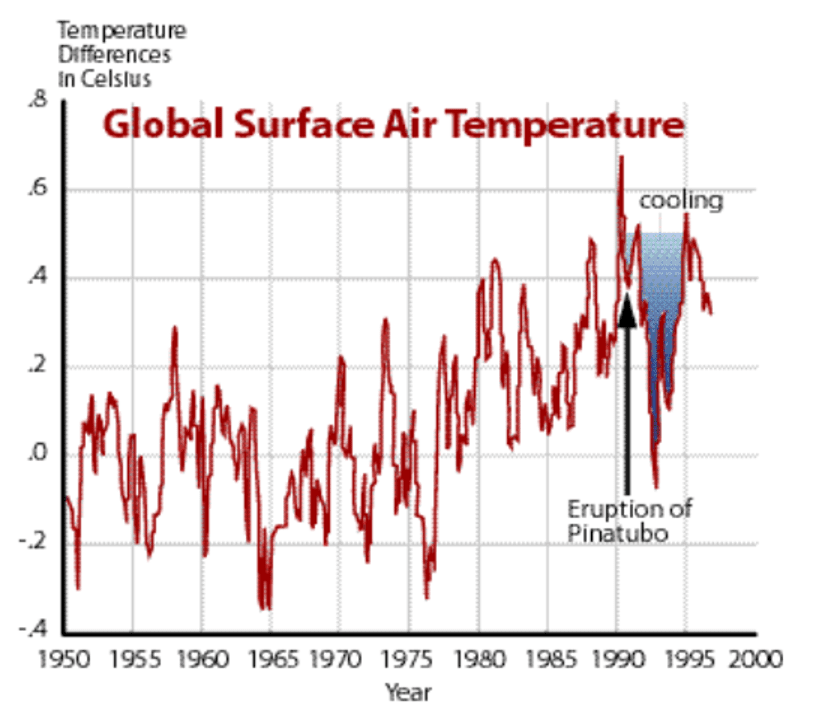 The Effects of Climate Change

The entirety of the planet is warming. Since 1906, the global average surface temperature has increased by more than 1.6 degrees Fahrenheit (0.9 degrees Celsius), and is even more sensitive in polar regions.9 The impacts of rising temperatures aren’t waiting for some far-flung future; the effects of global warming are appearing right now.

Many people think of global warming and climate change as synonyms, but scientists prefer to use “climate change” when describing the complex shifts now affecting our planet’s weather and climate systems. Climate change encompasses not only rising average temperatures but also extreme weather events, shifting wildlife populations and habitats, rising seas, and a range of other impacts.

Scientists have documented these current impacts of climate change:

If climate change and the planet’s warming continues, we are expected to witness the following signicant effects:

If you want to see dramatic eye-opening photos taken around the world that document many of these climate change effects, click here.

Earth’s sea levels are rising at faster and faster rates as waters warm and ice sheets melt. Researchers led by Steve Nerem, a professor of aerospace engineering at the University of Colorado Boulder, looked at data dating back to 1993 to track sea-levels and temperatures. Their findings, which were published in the Proceedings of the National Academy of Sciences journal in 2018, show that sea levels and temperatures aren’t just rising, they’re accelerating.21

The research group Climate Central has created a plug-in for Google Earth to illustrate how catastrophic an unlikely, “extreme” sea-level and temperature rise scenario would be if the flooding happened today, based on 2017 projections from the National Oceanic and Atmospheric Administration.

Some of their findings and illustrations are as follows:

3℃ Hotter: Rising sea levels will cause the Potomac River to rise and overflow into DC.

Now: New York City sits on one of the world’s largest natural harbors.

3℃ Hotter: New York City could suffer from floods around the city’s perimeter and low-lying areas, such as the West Village, due to extreme flooding from the Hudson River.

Now: San Francisco is prominent in the technology world and is home to the Golden Gate Bridge.

3℃ Hotter: San Francisco is also a peninsula, which means it can easily flood.

Now: Charleston, South Carolina already suffers from a flooding problem due to being flat and having a low elevation.

3℃ Hotter: If sea-levels and temperatures continue to rise, a boat will be needed to get to the city center of Charleston.

Now: Residents of New Orleans, Louisiana are no strangers to the issues that come along with sea-level rise.

3℃ Hotter: New Orleans could completely disappear underwater, and in the next century, 500,000 people will have to leave the area to stay abov.

If you’re interested in taking a look at more sea-level predictions based Earth’s rising temperatures, you can install Climate Central’s plug-in and see what might become of other major US cities

How You Can Take Action Against Climate Change

In 2015, 196 countries signed on to a single, sweeping plan that aims to keep global warming to well below 2° C (3.6° F)—or even 1.5° C, which is known as the Paris Agreement. It aims to build on decades of gradual work by the international community to combat climate change and adapt to its impacts. To eliminate the release of heat-trapping carbon by 2050, world leaders must work together, strengthening their commitments and cutting greenhouse emissions to ensure a safe planet for future generations. However, you can take action, too.

Here are few ways you can join the fight against climate change:

Food waste in the US occurs mostly in stores and at home—either because it spoils on the store shelf or before you can eat it. According to a Natural Resource Defense Council (NRDC) study, Americans throw away up to 40% of the food they buy.22 You can combat food waste by shopping for what you need, eating leftovers, composting scraps, and donating excess to food banks. Project Drawdown estimates that curbing food waste could avoid 70.5 gigatons of CO2, which would have a bigger impact than restoring 435 million acres of tropical forest.23

Renewable energy is fundamental to powering the world as we move away from fossil fuels. Modelled after World War II “war bonds,” Clean Energy Victory Bonds—a bill introduced to Congress by Sen. Udall (D-NM), Reps. Lofgren (D-CA), and Reps. Matsui (D-CA)—would offer Treasury bonds as low as $25 to finance the government’s clean energy programs. Using your democratic rights, try asking your representatives to support this bill to make Clean Energy Victory Bonds a reality. Additionally, you can purchase renewable energy from installers such as Blue Pacific Solar and RGS Energy, as well as plug into renewable utilities with companies like Clean Choice Energy, which don’t require you to install any new hardware in your home to get sun and wind power.

Overhauling the world’s transportation systems, both commercial and personal, would save as much CO2 as one billion acres of regenerative agriculture. Commercial trucks alone account for 6% of the world’s emissions—more than the collective emissions of airplanes around the globe. While individuals can’t revolutionize the shipping, flight, and automobile industries overnight, we can demand they change by voting with our dollars for public transit, using electric or hybrid vehicles, and reducing our total trips taken.

Acquiring virgin resources—from logging trees to mining minerals—exploits more resources than recycling existing materials. For example, recycled aluminum products use 95% less energy than creating new ones.24 About 50% of recycled materials come from households; if that number were to increase to 65%, at-home recycling could prevent 2.8 gigatons of carbon emissions.25 However, recycling wrong can slow the system and create more waste, so be sure to rinse out your recyclables and stay up to date on local regulations to make sure what you recycle isn’t causing contamination.

Humanist Beauty knows how important protecting the environment is to ensure a healthy future and planet for all generations after ours. Our products are formulated with 100% naturally derived ingredients and packaged in recyclable componentry. To complement this, we are always striving to make Humanist Beauty more climate-conscious by constantly updating and adding environmental commitments to our business practices.

We fully support the move towards a more circular economy by maintaining a carbon-neutral footprint. To do this, forecasted annual greenhouse gases are calculated, including office operating, manufacturing, and all shipping. Through our CarbonFund.org partnership, our company has ordered credits to support reforestry initiatives that completely offset our business emissions.

We Are Striving For Zero Waste

Additionally, at Humanist Beauty, we believe that beauty should live forever – not its packaging, which is why we are now committing to becoming a zero waste brand through the help of TerraCycle’s Zero Waste Box platform.

You can send us your beauty boxes, bottles, jars, tubes, and makeup palettes. The packaging doesn’t even have to be from Humanist Beauty; it can be from any brand. We’ll even pay and provide your postage to make sending your empty packaging to us easy and seamless. Once we receive your packing, we’ll hand it over to TerraCycle to be broken down and recycled or repurposed.

A few notes about our Zero Waste Program:

If you have any questions about our environmental commitments, don’t hesitate to email us at customercare@humanistbeauty.com.