From Albert Einstein to Oprah Winfrey, many top leaders ascribe their success to having followed their intuition. Intuition is that feeling in your gut when you instinctively know that something you are doing is right or wrong. It’s also that moment when you sense kindness, or fear, in another’s face. You don’t know why you feel that way; it’s just a hunch. In this blog, we will dive into what intuition is, the evidence of intuition, the difference between intuition and instinct, psychic and empathic intuition, and how you can better tap into your intuition.

A Look at Intuition

Intuition, sometimes also known as “the sixth sense” or “gut feeling,” is the ability to gain immediate understanding without the agency of conscious reasoning. Intuitive understanding bypasses the logical arm of the mind-brain network. In all probability, the majority of us have had such an experience at some point in our lives.

You may already have a good idea of what intuition is and the role it plays in your life. Perhaps you’ve had experiences like these:

Look over the words or phrases in the graphic below. If you have used them, you were probably describing an intuitive experience. 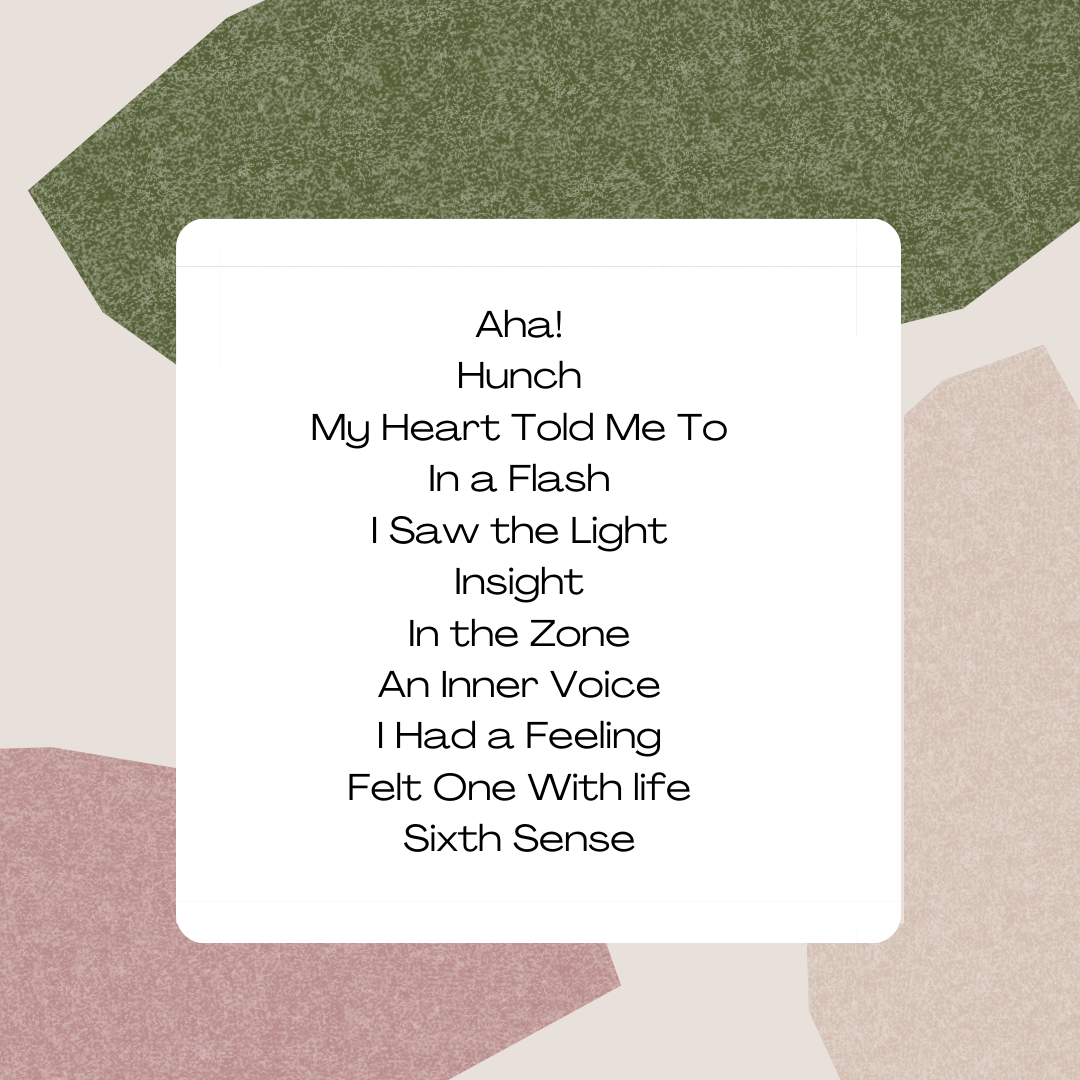 Even people who are familiar with intuitive experiences find intuition and how it operates hard to describe. One helpful way to understand intuition is as direct knowing or an inner knowing without thinking it through.

The Evidence of Intuition

According to Joel Pearson, an associate professor of psychology at the University of New South Wales in Australia, intuition is real and can be measured. In fact, it’s been widely studied by an array of scientists, spiritualists, and researchers.

In one study, participants had to decide whether dots were moving left or right on a screen. While this was occurring, subliminal messages were flashed quickly, influencing their choices. The positive subliminal messages made them trust their intuition, which resulted in more accuracy.1

Daniel Kahneman, a psychologist, says we have two different thought systems: “System 1 is fast and intuitive; system 2 is slower and relies on reasoning.” He argues that intuitive thinking can actually cloud judgment at times. But Gerd Gigerenzer of the Max Planck Institute for Human Development in Berlin, believes most people don’t reason with logic alone, but also with intuition.2

Gigerenzer says intuition is a “form of unconscious intelligence.” Furthermore, researcher Kamila Maleswka doesn’t think intuition equates irrational or illogical. According to her, it’s “experience and knowledge that people gathered throughout their lives; an ability that can be trained and can play a constructive role in decision-making.”3

In another study on intuition, participants played a rigged card game. There were two decks of cards that they had to pick from. One was rigged for both big wins and big losses, while the other was small wins with rare losses. After 50 cards, a hunch began to tell participants which deck was safer. After 80 cards, they knew the difference between the decks, but before their analytical brain knew anything, they started to intuitively select from the safer deck. 4

In short, intuition is a divine, finer knowledge of humanity that has both instinct and the ability to foretell future outcomes or identify a person’s true character. In contrast, instinct is a natural, raw, earthly knowledge limited to the changes affecting our natural environment/surroundings.

Here’s a deeper look into the differences and similarities between intuition and instinct:

The Fight-or-Flight reaction is a common instinct that gives you a sense of potential danger and how to respond appropriately. The keyword is “reaction” as the information goes through the brain stem and demands a response similar to a reflex.

Intuition Is Derived Both From Past Experiences And Deliberate Thought

Intuition is a sense or hunch that informs one’s decisions, but the individual may or may not be able to pinpoint the source of information. There is more of a connection with the prefrontal cortex, where the feeling is evaluated with some potential logical leads. Intuition leads to intentionality on what to do with the feeling rather than a knee-jerk reaction.

Instinct tells us of any impending danger coming to sight. For instance, instinct in animals allows them to detect the ecological imbalances of their natural habitat like a forest fire, which leads and guides them to migrate to a safer place to live.

Instinct in humans fulfills the natural expansion of life and survival. It enables us to watch out for incoming dangers or misfortunate incidents, similar to the animal instinct.

Intuition Is the Faculty of a Higher Sense of Perception

This higher sense of perception is a level of development above instinct. Intuition is the ability to identify a person’s moral character, be it of good or bad intention. However, intuition can only be developed after the basic instinct of being constantly aware of the natural surroundings and their changes – instinct is a prerequisite to gaining intuition.

As an exception, intuition is sometimes gifted in certain individuals, hence you may notice some people have a keen perception to foretell the outcome of a phenomenon or even an impending windfall or problem. Even so, intuition can be trained and cultivated in everyone through the constant practice of correct contemplation and meditation.

The Difference Between Psychic and Intuitive Experiences

The terms psychic ability and intuition are often used interchangeably, and while there is some overlap, many individuals define them differently. Intuition is a natural ability that every single person has without having to put effort into aside from listening to your body and trusting it.

Psychic ability, though, is preternatural and often takes effort to develop and maintain. Perhaps the main difference is that intuition is based on external environmental information, whereas psychic ability is not. Psychic individuals tend to be highly intuitive, but intuitive people are not always psychic.

The overlap with psychic ability is that the mind usually isn’t aware of where the information is coming from. Listening to your intuition helps you tap into your psychic ability; the common ground between them lies in learning to look inward, focusing, and trusting what you’re receiving.

Psychic experiences, on the other hand, have absolutely no reliance on external environmental factors. They are preternatural in the sense that there’s no explainable reason why that information has been received in the way that it has been.

In her book, Hidden Channels of the Mind, Louise Rhine, the wife of famous Duke University parapsychologist J.B. Rhine, analyzed thousands of intuitive and psychic stories that the public sent to her. She noticed that psychic experiences occur most frequently in emotional situations or where there are emotional connections.

Are You An Intuitive Empath?

Intuitive empaths are believed to be a unique kind of empath that combines empathy, or the ability to understand and share the feelings of others, with instinct and perception. According to Judith Orloff, MD, a psychiatrist, intuitive empath, and the author of The Empath’s Guide To Survival: Life Strategies For Sensitive People, intuitive empaths may have the following traits:

A highly intuitive empath is believed to have very high levels of intuition. They are said to be extremely perceptive and sensitive to others’ emotions. They may take on the suffering of others and often go the extra mile for people as a result. Highly intuitive empaths may also be easily overwhelmed by noises and smells.

While there is no evidence supporting clairvoyance, some people believe claircognizant intuitive empaths may have psychic and telepathic abilities. It’s suggested that they have a strong sense of knowing, whether it’s telling when someone is lying or perceiving the best course of action to take in any situation.

Some believe that emotional intuitive empaths tend to absorb others’ emotions and can become easily drained and exhausted as a result. They can be hugely impacted by external energy and need to be very careful about who they choose to spend time with.

One study noted that people with high trait empathy may be able to tap into other people’s emotions. However, there is no evidence that this is the case for intuitive empaths specifically.5

Animal and plant intuitive empaths are believed by some to feel a deep connection to flora and fauna and have the ability to communicate with them. They are considered to be very nurturing, loving, and compassionate.

According to one study, plants are in constant dialogue with organisms in their environment through volatile organic compounds (VOCs). This may even have applied uses for agriculture. However, there is no current research indicating that human beings can communicate with plants via VOCs.6

Tapping Into Your Intuition

Intuition is a powerful extrasensory intelligence that we all have; but, because it occurs subconsciously, it takes more sensitivity and subtle approaches to hear what it has to say.

Developing intuition is a skill that you can get better at with the right techniques. Here’s how to feed your intuition so it can be flourishing and ready to advise:

Intuition is an incredibly powerful tool for decision-making. It ensures we respond in the moment, freeing up valuable mental resources to tackle novel experiences and optimize learning. Intuition provides us with a “gut” response – an inner voice ­– beyond logic or learned responses, revealing both who we are and the knowledge we have gained.

Intuition is also understood in many cultures as fundamental to religious and spiritual experience. Consider this: no one can point to any Deity as a material object or describe the physical dimensions of prayer. Worship is inherently an intuitive experience, a spiritualized dialogue among people and what many call the divine.

Have you had an intuitive experience? Let us know in the comments!